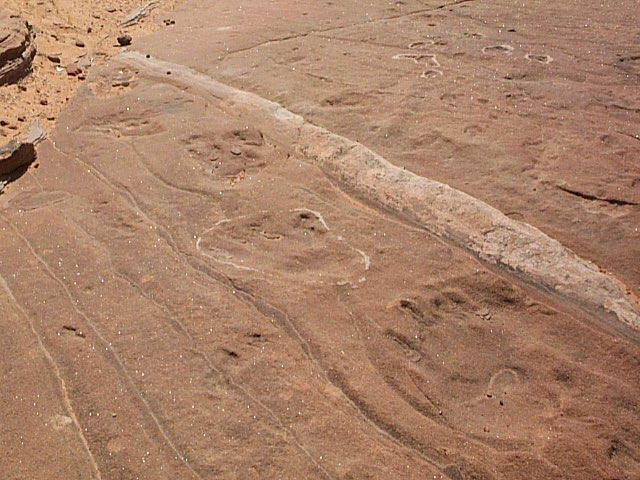 Laid bare across portions northern Arizona and southern Utah, the "frozen dunes" of the Navajo Sandstone create a beautiful but largely-barren slickrock wilderness.  This Early  Jurassic Age sandstone formation, dominated by eolian processes was most likely deposited over  a 15 million year period between 192 and 178 million years ago.  During this time period the Western Interior of the Colorado Plateau was between 8 and 17 degrees north of the equator.  The general climate was arid but may have been interrupted from time to time by weather associated with monsoon moisture, tropical storms, an occasional hurricane as well as periodic fluctuations in climatic patterns.

Wind-driven sand dunes, probably originating along a shallow sea located far to the north, pushed down from the N-NW in successive waves that with time produced a regional sand sea (erg) of impressive extent.   Some researchers believe the erg approached Saharan proportions (150,000 square miles) and was comparable to the spacious dune field of the Empty Quarter in modern Saudi Arabia.  In fact, the deposition of the Navajo has been referred to as "one of the greatest eolian events in geologic history" (Riggs and Blakey, 1993).

Life across this ancient sea of sand was expectedly sparse but not totally absent as the fossil examples contained on the following pages will demonstrate.  Although dominated by eolian sandstone, there are other types of sedimentary rock in the Navajo record and these deposits hold important clues in the   reconstruction the Navajo paleo-ecosystem .   It is important to remember that in a desert environment, only a  percentage of the geography consists of actively moving sand dunes at any given time.   Other areas are usually more stable and thus provide opportunities for a variety of life forms.   The Navajo stratigraphic record indicates that water did exist on the Navajo environment iperhaps in the form of emphemeral ponds produced by tropical rainfall events, longer lasting playa lakes and spring oases. 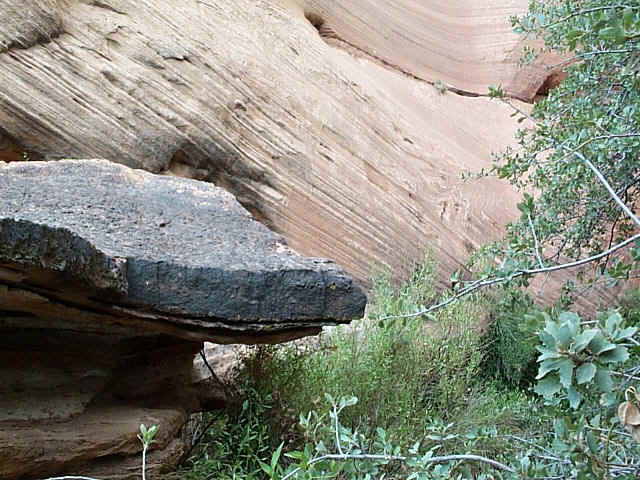 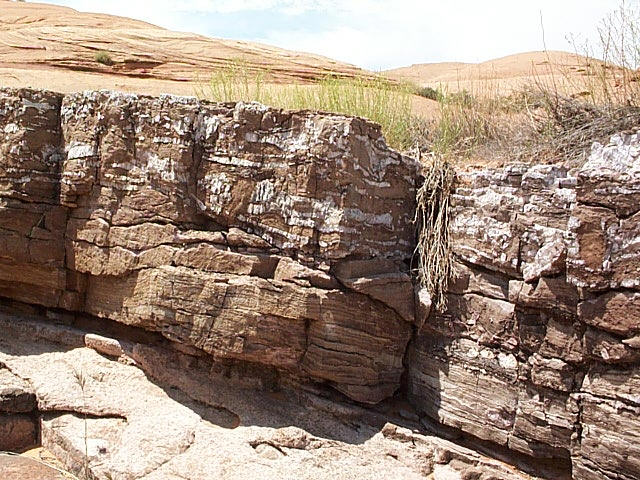 And where there was water...there was life!  At the very least, oases must have existed near the periphery of the Navajo dune field and it is probable that in other scattered locations, groundwater may have risen close enough to the desert surface to support pockets of life.  In addition, occasional flash floods may also have brought water and sediments into this area from time to time.

Cyclical climatic conditions may have also played a role by periodically interrupting the normally dry environment allowing life to expand across much of the Navajo surface only to contract once again as the next dry cycle enforced itself.

Although the water quality may have been poor (saline, alkaline and poorly oxygenated), the fossil record indicates that life did adapt to these harsh conditions, perhaps flourishing briefly...before the shifting sands brought change and covered up these moist surfaces.

Unfortunately for us, the depositional environment on the Navajo Ss overall was not very conducive to fossil preservation.  Decaying life forms were probably subject to scavenging, long periods of exposure, alkalinity and/or oxidizing conditions that did not favor the permineralization process. As a result, only a handful of vertebrate skeletons have been discovered and trace fossils usually only exist in scattered pockets where conditions were more suitable for preservation.   Even though the Navajo Ss fossil record is poor by most standards, recent discoveries by the likes of dedicated amateur geologists (Fran Barnes, Moab) are beginning to reveal a paleo-ecosystem more robust than previously believed..

Paleontologists typically approach fossil hunting much like a fishing trip.   You usually go where the "catching" is good and because most other geologic formations have better fossil records, much of paleontological evidence in the Navajo Ss has yet to be thoroughly investigated and published.

The goal of this website is to highlight and photo-document the various types of fossils found in the Navajo.  The assortment is suprisingly robust given the harsh depositional environment and there within lies the paradox.

"Footprints, however, tell a different story.  The Navajo formation is full of fossil tracks representing diverse animal communities.  Although tracks are known from almost every Mesozoic formation in Utah, the Navajo formation currently reveals the most varied assemblage of footprints.  The curious paradox indicates that the desert environment, traditionally regarded as hostile to life, [somehow] supported one of the most diverse ancient animal communities ever documented on the basis of the fossil footprint record."

In summary, this curious geologic formation and unique paleo-ecosystem deserves a more rigorous paleontological investigation.  It is somewhat surprising that over the past century....only a handful of vertebrate sites have been identified when surely others exist.  And there is little doubt that new scientific discoveries await those field specialists willing to do a little "casting and fishing" across this ancient sand sea.

Please contact the author if you know of other paleontological work that should be included on this website.