Goal:   To create a new economic opportunity for Page and bring us a step closer towards becoming a creative community.

The concept of the Page Paleontological Science Center has evolved around a number of independent factors:

The public fascination for dinosaurs is well known and needs no discussion here except perhaps to highlight past marketing failures that centered around tacky dinosaur shops and unimaginative museum exhibits across the Nation.

The Discovery Channel has renewed general interest in paleontology with the shows "Walking with Dinosaurs" and "Raising the Mammoth" in which drew huge television audiences in the year 2000.  The show Raising the Mammoth told the story about a frozen wooly mammoth in Siberia that has been removed in a block of ice and transported to an ice cave where it can be thawed under controlled conditions.

Larry Agenbroad, Northern Arizona University was on of the featured scientist.  His interest in mammoths led him to Glen Canyon National Recreational Area where mammoth dung was discovered in Bechan Cave along with coarse hair along with fecal remains of the hair of ice age sloths.  The dung was dated at over 12,000 years old at time period when the vegetation in Glen Canyon was dominated by blue spruce and water birch.

A second mammoth show produced by Discovery Channel called "Land of Mammoth" is slated for television viewing on March 11, 2000.  The mammoth story is generating significant press since the prospect of cloning the mammoth has been raised by Larry Agenbroad.

In summary, mammoth lived in and around the Glen Canyon area during the last Ice Age and the story needs to be told in greater detail than what we currently have down at the Carl Hayden Visitor Center.

Excavation of two pliosaurs in the Glen Canyon National Recreational Area in the year 2000 by the Museum of Northern Arizona drew considerable regional media coverage.  Note: contrary to what the article says the discovered creatures were marine reptiles not dinosaurs.  One unsolved mystery is how two marine animals could happen to be fossilized together like this.  Normally, a large dying reptile like this would have been quickly scavenged by other marine creatures.  One expert commented that

"It would be unusually for both of them to die at the same time.  They must have been stranded together or subject to some catastrophic event."

Funds have been approved to conduct a paleontology survey of Glen Canyon National Recreational Area.  The survey is expected to take 3 years to complete.

The recent discovery in the year 2000 of a dinosaur trackway in St. George has created quite the regional stir.  Jim Kirkland, Utah State Paleontologist calls the trackway discovery the best preserved specimens in the state.   Tourists have flocked far and wide to view the trackway.  The tracks preserved in the Moenave Formation are amazing for the detail they provide. 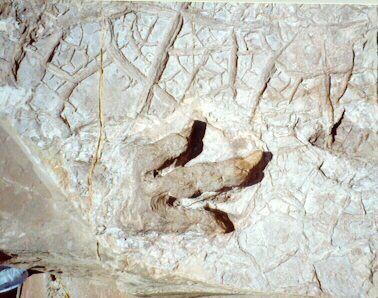 This monument contains 1.25 vertical miles of sedimentary rock exposed on the Kaiparowits rocks spanning the last 35 million years of the Cretaceous.  Sites have been found in each stage (a subdivision of time in a geological period) representing the Late Cretaceous in this area. This research has generated the most comprehensive and continuous Late Cretaceous fossil record of land animals known in our hemisphere, and possibly the world. In the future, this region will be the global reference for life on land for much of the Cretaceous.

Although several thousand dinosaur specimens have been identified throughout the thousands of feet of terrestrial (land-deposited) rocks in GSENM, only two dinosaurs have been found that were complete enough to identify to the genus level.  Past and ongoing field research suggests that the Upper Cretaceous basal Wahweap Formation has particularly high potential for yielding significant new data regarding the history of life in North America. There is only one named dinosaur from the early Campanian stage (84 to 80 million years ago) of the Late Cretaceous in all of North America.  Already, collections of teeth from the basal Wahweap Formation at GSENM show that these rocks in Utah pre-serve the greatest known diversity of dinosaurs from this age in North America. Triceratops is the best known of the ceratopsids, which represent a spectacular family of horned plant-eating dinosaurs that had only been recognized in Late Campanian to Latest Maastrichtian stages (80-65 million years ago) in North America.

The table below list the formations found in the Grand Staircase-Escalante National Monument that are fossil bearing.

Summary:  The time has come where we need a facility to put some of these discoveries on display, to tell their stories, to reconstruct the paleo-environments and to give us cause for reflection upon changes in the earth climate system.  The interpretative information that the Page Paleontology Science Center would provide would not only enrich the visitor experience in this unique landscape, it would provide a necessary outlet for scientific research and discovery and foster communications between several regional entities and the lay person.

The Science Center would entertain as well as educate.  It could simultaneously provide provide substantial economic benefits to the Page area and put us on the map "intellectually".   The educational opportunities for this facility are broad and far reaching.

Notes on Economic Development and Building a Creative Community - Communities must understand their unique challenges, consider the experience of others and customize their own strategies to fit the situation and its proper niche in the emerging age of the New Economy.  Communities must learn to think regionally, create forums, establish a network with other creative communities and avoid the mistake of borrowing unimaginatively from other communities.  The goal is to create new ideas and opportunities.

Every community should map out their unique identity.  Community members should be encouraged to think creatively and generate new ideas.  It is important to take the best ideas and transform them into innovative and practical applications in a timely fashion for neither ideas, nor people survive very long in isolation.  Evaluate infrastructure and regulatory frameworks and remove those obstacles that unnecessarily impede economic and community development.  Innovation needs an infrastructure within which to flourish and a base from which to spread.  The innovation needs to reach its intended user...its market.  As demand and reward grow....others are often inspired and this provides the stimulus for more creative thinking and a new generation of ideas.

Paleontological studies have been conducted within the area of the monument and vicinity since the middle 1800s, so some idea of the richness of the fossil record can be stated. Several formations are worthy of considerable research for several purposes. An appendix lists all
the confirmed taxa from within the monument.