China - April 6 and 7 -  A series of huge sandstorm events called "the worst of the spring season" develop over Mongolia and sweep across western China reducing visibilities to near zero and making ground transportation all but impossible.  The resulting huge aerosol cloud mass is picked up by orbiting earth satellites as it forms over China and heads out to sea.

Page, Arizona -  April 12th  (1700 MST) - The leading edge of the huge Asian dust cloud reaches Page in a dramatic fashion a few hours before sunset.   Approaching at an elevation of approximately 15,000 msl, the aerosol layer appears as a distinct dust layer with undulating waves.  Within hours, a thick veil of dust covered the entire sky and gave the appearance of a thick overcast cirrostratus cloud layer shortly before the sun set.

Synoptic Situation:  A Cold front has passed Page earlier in the day at 0800 MST with 0.02" of precipitation.  The dust cloud arrived 9 hours later on a W-NW flow on the back side of the trough axis.

Page, Arizona - April 13th (Sunrise) - A thick aerosol layer obscured the sky aloft.  The rising sun shone dimly as a pale yellow disk that could be viewed directly by the naked eye.  The yellow morning sunlight filtered by the thick aerosol layer that was visible in all quadrants gave the eerie illusion of suddenly being transported to Egypt.  It was a National Geographic Moment.
Paul Ostapuk, SRP Meteorologist

Update:  This Asian Haze event has been officially confirmed by:

The stage was set in the fall and winter of 2000/2001 which was unusually dry and warm.   On January 1st, China has a small dust storm which was so noted as an "unusual event" because a January sandstorm had not previously been reported by  Chinese news sources.  Chinese weather experts warned, however, that since these storms were of unusual severity and came much earlier in the year than expected, the related government departments should take note and make preparations for more."

On April 6 and 7, a series of huge sandstorm events developed over Mongolia and swept across western China and subsequently produced a huge aerosol cloud that was observed by orbiting earth satellites.

Read Notes from the Field on these huge Chinese Dust Storms

Once the aerosol cloud was out over the the Pacific Ocean, it was pushed by the prevailing winds up towards the Gulf of Alaska and was still recognizable as a coherent mass even as it moved along the British Columbia coastline.  At this point,  the aerosol clouds began to weaken and dissipate as it moved down on a NW flow toward the Great Basin region of the western U.S.  The aerosol laden air mass that moved inland, however, was still very significant in size and magnitude.

The haze layer was initially confined to the layers aloft on April 12 and 13th but by April 14th and 15th as subsidence set in with a developing high pressure system the main band of aerosol moved down to lower levels and reduced local visibilities which are usually over 100 miles down to just 30 miles or less.  The trapped hazed layer persisted in Page, Arizona until the 16th.

The air mass was tracked into the Midwest regions of the United States.  On Wednesday, April 18th, Tucson reported east winds a pronounced haze event that briefly lowered visibility to less than 10 miles.  This air mass was obviously contaminated and modified by a wide variety of pollution sources along the way may none-the-less have also contained a small remaining unknown percentage of Asian haze.  If so, it may have represented the last hurrah and the official end of the Asian impact to Arizona.

The Asian Cloud(s) moves across the Northern Pacific.

And by April 13, 2001 a portion of the dust cloud has moved inland and is impacting parts of the American West
(Note the high Aerosol Index (orange/red) and also note the Sahara dust storms moving out into the Atlantic Ocean. 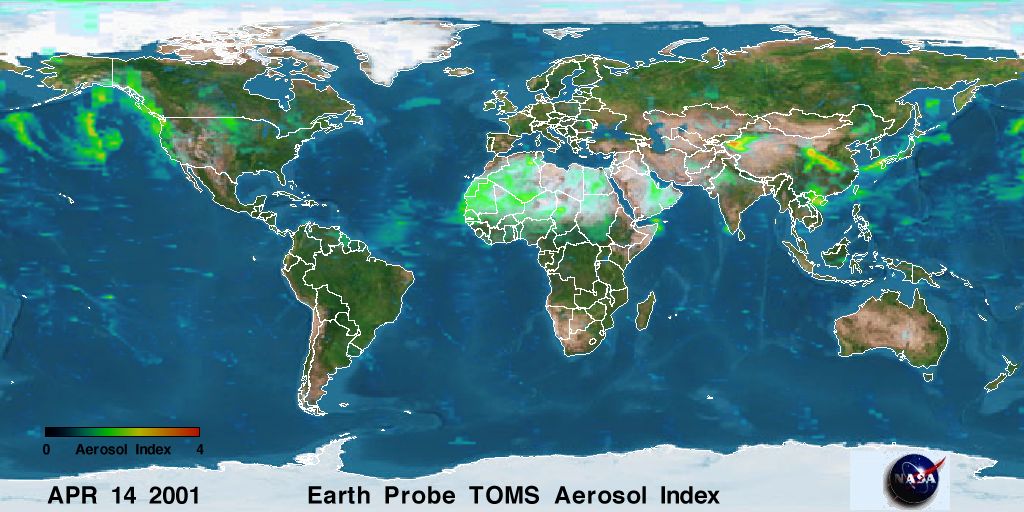 The Asian Cloud is breaking up but continues to impact the West Coast.

What China Has Said About The Recent Sandstorms

How often do these dust storms occur?

A report by the Chinese Academy of Science has indicated that this sand comes from the degraded pastureland and dry land of the area around the deserts of Inner Mongolia. Records show that during the 17th century there were from 0.3 to 1.0 sandstorms in Inner Mongolia per year, but by 1990 the annual rate of occurrence had risen to 3.0 to 5.0 times per year. At the same time, the rate of occurrence of sandstorms in Beijing has also increased, and the number of violent sandstorms that occurred this spring in Beijing was more than three times the average for the same period in the 1990s. Some have called the sandstorm that occurred on April 10, 2000 the most serious such storm in 10 years. Other than natural factors like aridity being the cause creating such conditions, the fact that China’s ecological environment has suffered damage is also a major source of this calamity.

Another Estimate:  Yang Gensheng, a researcher at the China Academy of Sciences, said China’s northern regions have had an average of 15 sandstorms a year over the past 50 years. "The environment in those regions is extremely bad and the deserts are moving closer to the Yellow River each year," he was quoted as saying.

"The great Mongolian commander Genghis Khan conquered much of the known world in the 13th century.  Before he died, he chose his resting place in verdant grassland in western China.  Now that spot is not covered with grass, but with sand. About one million square miles, one third of all China, have turned from grasslands to desert as a result of overgrazing, clear cutting of trees, and overly ambitious development policies."    Weather Channel Calendar Trivia

"The city of Beijing was once again hit by dust storms on the 1st day of 2001. The storms were so severe that many airplanes were prevented from landing. People throughout the northeast suffered greatly from this severe weather, which cast a shadow on Beijing's application to host the Olympic Games in 2008.

According to a report from Xinhua News Agency, these severe dust storms had affected most areas in north China. The storms had mostly passed by the morning of Jan 2nd. But Weather experts warned, however, that since these storms were of unusual severity and came much earlier in the year than expected, the related government departments should take note and make preparations for more."

There are no immediate measures to prevent the coming of the so-called "gatecrasher of spring" that causes eye, nose and respiratory illnesses. Experts say that it is best to remain indoors and if one has to go out, to wear a mask.

The yellow dust phenomenon happens after sandstorms are created in the inland deserts in northern China, usually during dry spring weather, by strong convection of currents of warm and cold air that sweeps soil particles up to high altitudes.

They typically rise to a height of 3 km to 5 km before blowing eastward at some 30 meters per second, crossing the West Sea before arriving in South Korea in two to three days.

In addition to potential health problems, the dust in extreme cases can cause visibility problems for pilots, hinder the operation of precision machinery and impair the growth of agricultural products.

There were reports the dust may have carried the viruses that caused a deadly foot-and-mouth epidemic that hit the nation's livestock industry last year.

Other Extreme Asian Dust Cloud Events to Reach the U.S.

The late April 1998 event is often referred to as the first documented case study for Asian transport that raised the consciousness of this type of long range transport across the Pacific.  It is becoming increasingly evident that transport events of various magnitudes occur each year.  Only the very biggest event receive media coverage but the fact is that transport events occur nearly every spring season.

April 25 to May 2, 1998 - The first evidence of this plume was a milky white sky with horizontal visibility > 100 miles (a rare combination). On subsequent days the sky remained hazy and the horizontal visibility steadily decreased as the plume slowly descended toward the ground. (Research Projects of Dr. Kevin D. Perry)

The Asian dust storms of April 1998 had major consequences to human health and welfare. According to CNN, on April 15, twelve people perished in the dust storm in the Xinjiang Autonomous Region of China alone. It is likely that this natural disaster has caused additional casualties along its path. Yellow muddy rain, reported over eastern China and Korea, produced an economic loss of unknown magnitude.